I love the BBC and have done for a very long time. But now it's very much a grand British institution that has lost its way under poor management - which is much like another struggling stalwart of the British way of life, Lloyd's Bank. The loyal troops on the ground (and the paying customers) are long suffering victims of some of their arrogant and "disconnected" bosses' incompetence.

We are still finding out more all the time about the rate and scale of that BBC incompetence. The "far too easy come" money that went (just as easily) on greasing the various exits of already well over-paid executives is simply astonishing. It ought to be a resigning or dismissal (with no compensation) matter for any high level executive involved in the decision.

But we can at least commend the present leadership for not trying another logo change, and sticking with the one above since 1997. At the time the change of "corporate branding" to the simple thing above, from something not a different was as an ego trip for the DG, and costed estimated to have cost £1m, then £1.7m a year over three years of implementation. At 1997 prices!

We can all envisage the meetings of sincere and intense arty types to discuss and insist on this crucial landmark in our cultural history. I'm terribly sorry, I would have been beastly and taken all but £500 of that out of the main board's salaries.

It is a particular mark of the curious and profound relationship that the BBC has with the licence payers that its own "Logo history" page has been obliged to use content from one of those die-hard nerd sites (sorry, no other words conveys as much in so little) who has being doing the BBC's job for it.

The BBC has also relied on other TV aficionados to turn up long lost recordings of old shows that the BBC management in its wisdom had deleted or otherwise misplaced.

Could anyone have known back in the 70s that the internet would come along and give an extended lease of (commercial) life to just about every recording of anything ever made? The BBC hierarchy has not shown conspicuous prescience in matters of the future at any time since the very early days when it actively engineered that future with its own resources for the benefit of the nation; and the founding visionaries, talent and engineers were replaced by paedophiles, journalists and accountants, who now seem to buy-in just about everything from foreign suppliers.

Clearly there are many at the core of the BBC would also wish that Jeremy Clarkson could have been dumped for his robust and non-PC approach to life,  and broadcasting - but the international sales footprint of Top Gear is simply astonishing. Much to the chagrin of many delicate BBC egos, Jezza & Co have given the entire WORRRRLD what it wants.

Never mind just a Knighthood, maybe Lord Clarkson should be put in charge of the whole thing?

Posted by William Poel at 14:26 No comments:

Phoney wars: Are you listening, Vodafone?


Regulars will know I am not a fan of BT or Vodafone in particular - but just about every telco deserves a decent kicking and berating for dodgy practises and outrageous marketing that is designed to confuse and prevents customers from making simple choices and switches. Worryingly, they seem to go to great lengths to ensure that they are all as cynical and outrageous as each other. There appears to be a general agreement not to offer any sort of customer service beyond that which a trained monkey can provide.

News that the EU commission has now forced all EU telcos to stop reaming their hapless customers with cartel-rigged rates for data (now "only" a maximum of 37p a MByte!) is long overdue. And as ever with heavy handed political intervention in technology, it is too late and quite pointless - but perhaps the idea that the EU get involved is enough to cause these outrageous monopolies to think their tactics out more carefully in future.

Vodafone pre-empted the EU move with its Eurotraveller product last year. This is actually a very fair proposition indeed - but when I went to Majorca recently all the outbound calls dropped a second after connecting. Vodafone's effusive twitter "support" was less use than a rubber hammer, and I even managed to reduce them to terseness by rejecting their various hopeless suggestions for me to find my own fix.

The US may be even worse since it has a generally more primitive cellular scheme than Europe, as a result of a very slow start; but the way that some hapless travellers got home to huge bills (as much as $201k!) is legendary. There is even a vast Wikipedia entry on the topic of EU roaming charges.

The whole point of a phone network is that once the network is in place, the cost of providing services is marginal to negligible. There is barely even any more electricity used on the network when a call is made. Once the fixed costs (like the outrageous licence fees - a vast stealth tax on the users) are covered it's almost all profit. Maybe all the execs are too busy working out their offshore taxation plans to notice their general services are so patchy.

This is a typical Vodafone customer reaction: 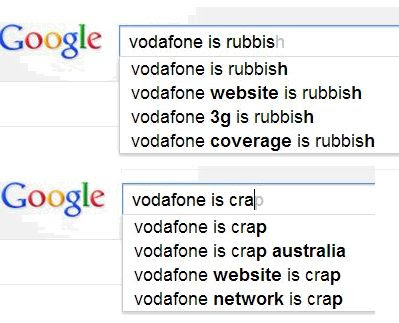 I'd like to give Vodafone credit for leaving this online, but I think its just because they can't be arsed to manage the forums closely, hoping that their users will talk amongst themselves while Vodapeople do more important things - like devise specious and arcane marketing propositions to confuse customers.

And the way google thoughtfully suggested search phrases tells another tale that Vodafone PR would be advised to note. To be fair, I also I tried to find evidence that  "Vodafone is terrific"... but this is all the suggestions Google gave me.

Overall, it doesn't seem terribly encouraging for Vodafone, does it? I expect that all networks are about the same (although Google (UK) gave Virgin Mobile an almost clear rating in the above tests), and they will argue that they have so many customers that statistically there are going to be a large number of dissatisfied customers whatever they do.

It's just that Vodafone spends so much time "in my face" telling me how great they are, occupying costly shops in otherwise empty high streets, and spending £gazillions of F1 sponsorship, that I feel obliged to remind them that their own view of their wonderfulness is one that not widely shared.

BT- the worst on-hold music ever.

You would have thought a company that likes to kid the world it is a technology leader and provider of advanced business communication systems could do better than this, but they cannot.

This is their current on-hold music to business customers:-

I am not sure I can actually add anything more to this, other than to say it seems emblematic of a company that sweats its assets until they are not merely "tired" but they are beyond the grave.

Ancient copper infrastructure is patched and patched and remains crackling and faulty for years before proper remedial action is undertaken - and customers are obliged pay the same for a dreadful services, as the lucky ones living in areas where the local thieves have stolen all the copper, and it has been replaced by fibre.

Only BT shareholders could be impressed by this news - the BT phone system hold music is clearly being played on a decrepit 1980s tape machine that was written of in the accounts 30 years ago.

As customer PR goes, would you buy a £5000 fancy phone service from these people?
Posted by William Poel at 10:39 1 comment: